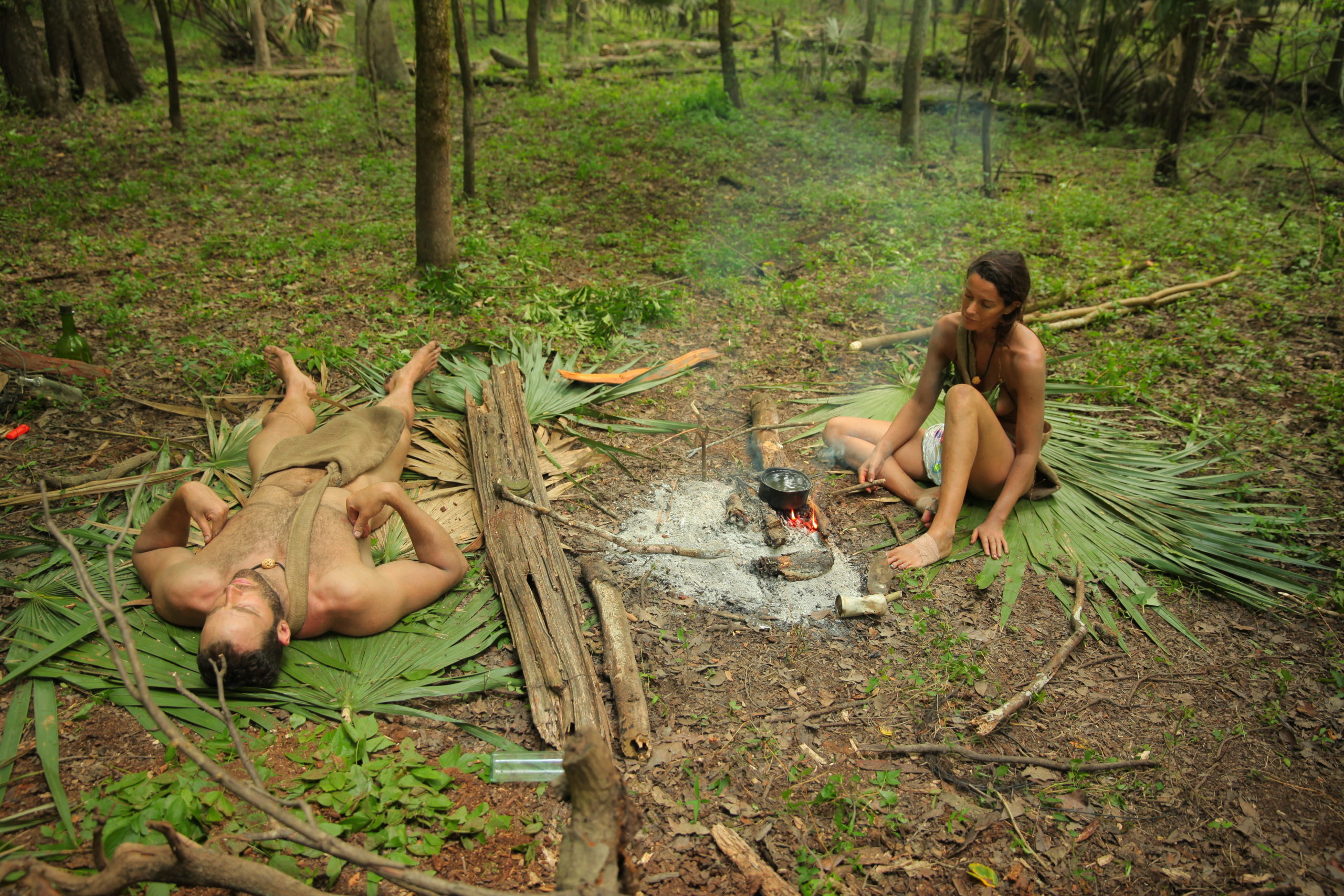 It’s at this point in time I realize that I can’t do justice to this story in a blog.   I have described one day, one moment in detail and filled pages.  It may well be one day I’ll write the book, but for now I’ll skim over the deeper details and look at all I learned from committing to this challenge.

Without giving too much away to people who haven’t seen the episode… I survived.  So much of what we went through wasn’t shown as it was considered too extreme for anyone to realistically have survived through.  For 17 days we walked on what we called our “knife edge”.  We knew that any second, any moment, any small event could lead to us having to tap out because we were never established enough to consider ourselves settled.  We had four major storm systems pass through and all of them wiped us back to nothing, no matter how hard we tried to prepare for them.   We always lost our fire, even with a roof over it, and our shelters took a hammering in gale force winds with them being constantly ripped apart no matter how solid we made them during the days.

Despite having eaten a few snakes on the first 4 days of the challenge this soon dropped back to nothing.  We realized that the reason they were so abundant at that time was we were the only patch of dry land for miles and once we were flooded out, they went elsewhere.  That’s the problem with being in an area that is the same for miles around, there is nothing special about your patch any more and the prey heads for somewhere with less humans.  We managed to catch a few frogs at night that happened to make our shelter their home but we were located in an area with no edible plants so our options were limited.  I made a crawfish trap that actually managed to get 6 or 7 crawfish a day for about 6 days and that kept us going for a bit but it wasn’t the most solid of traps as we had no good vines to use as cordage and so it was tied together with roots that quickly became brittle.

Quickly, the coolest snake story from the swamp ever – one night when we were boiling up the snake, we realized that there was an oily scum on the top of the boiling water.  (We had chosen to boil the snake instead of cook it over the fire because we were trying to get the most nutrients from the snake in the form of a soup as well as the meat).  This was the only food we had gotten all day so we pushed on regardless and tried to eat the snake we had cooked.  It tasted awful!  I can’t even think of anything I’ve ever eaten to compare it to.  You know that it must be dreadful because even starving as we were, we couldn’t get it down.  It was such a shame to waste the meat but we realized that we had forgotten to cut out the scent ducts on one of the snakes and it’s mating musk had tainted our soup.  From that moment on, I could smell where the snakes were in the swamp from a good 50m away.  I would smell the smell that tasted like that soup and sure enough, in the distance, I would see a snake coming towards us.  Like a spidey sense but with snakes.  I’m not sure if I still have it or how long it lasted but it was sure handy to help avoid or hunt those little suckers.

We also quickly ran out of viable dry wood and had to keep ranging further and further afield to find some.  It was about 3 days into having no dry land that our feet began to be afflicted with trench foot.  We had struggled with quite severe infections in our feet from the beginning.  The water we were constantly in was murky and one of the trees in that area would drop branches with horrible black spikes on them and any large punctures would soon become infected.  Again, something they didn’t really have time so show was on day two I got a systemic infection from a black palm spike hole in my foot.  I’ve never had a systemic infection before so I wasn’t really sure what was happening to my body.  I knew I had some infected holes in my feet because I could feel them when I was walking but my ankle began to ache like I had twisted it, and then my knee and then my whole leg became achy and sore like I had bruised it and it became hard to walk.  I saw red lines creeping up my leg and that’s when I knew what was going on.

People often ask why we don’t make shoes first thing in these challenges.  Quite often we will joke out there when something goes wrong and say to each other “well why didn’t you make some shoes?”  Fact of the matter is that it is extremely difficult to get the right materials to make viable shoes that last.  Some barks work but you need to get the right strong cordage to hold them in place.  Leather is definitely the best but you need a hide for that and I’ve never had the fortune of being in an area with large enough game to kill or scavenge that would have a viable hide for the job.  In the swamp we were surrounded by mud that you would sink into up to your knees sometimes and even the crew with their gaiters and technically laced boots would lose their shoes to the sticky mess.  No way natural shoes that we could have made would have stood up to that.

Systemic infections can kill quickly once they reach the lymph nodes and the medics were notified about these red lines and came in to check it out.  They went off to the side and had a long chat with producers.  When they returned to me they said that the medics were all for pulling me out of the challenge but the choice was mine.  They could begin to immediately give me a massive dose of antibiotics to try to fight the infection or they would take me to hospital and put me on an antibiotic drip.  They knew that the antibiotics would upset my empty stomach and the choice was mine.  I chose to stay.  Then began the twice-daily agony of scrubbing the holes in my feet out with peroxide and a scrubbing brush in some kind of attempt to help keep the infection at bay.  I tell you, I still remember the sweats I would get when the scrubbing and burning started.  Luckily they did the job and after a few days, the infection was gone.  Those holes in our feet stayed for a good two weeks after the challenge finished and I still have the scars as a reminder now.

So holes in our feet, and then the rot sets in… for those of you who don’t know what trench foot is, it’s a medical condition caused by prolonged exposure of the feet to damp and wet conditions.  So basically your foot begins to rot.  It starts with a red rash that burns and then those spots open up and the flesh begins to really deteriorate.  Thing is your feet feel so hot and all you want to do is put them in cold water but that’s the thing that’s making it worse.  It also really sucks when your very existence depends on you being able to walk through water to get firewood and food.  The more time we spent trying to stay on our bed platform and out of the water, the colder we were going to be and the less we would eat.  It was a terrible cycle.  It was ultimately this that ended up in our decision to leave to try to find dry land on day 14.  We had spent 9 days with no dry land and it came down to trying to better our situation or tap out.

This was not a decision we took lightly.  After being out in the swamp for 14 days with very little food, we hardly had the energy it was going to take to walk for however long to find dry land and then begin again.  It’s all very well building shelters in the beginning few days but we only had a small, 4 inch bladed knife (a present to Billy from his father) and to build a shelter from scratch with that as our main tool would take almost more effort than either of us had left.

It was a treacherous walk from the first camp to the second.  The water was way deeper now and sometimes we were forced to swim.  I remember that I no longer cared where the alligators were although I did keep a good eye out for the deadly water moccasins.  I think I was just in such a state after the first part of our ordeal that if something took me, then it was my time to go.  It took us the good part of a day to get to somewhere feasible and I’ll never forget the moment when the endless water formed an island in front of my eyes.  We had to balance across a fat log fording a deep stream to get there but the first moment my foot hit solid ground was amazing.  My body almost stumbled as it struggled to get use to not sinking and compensating.  It wasn’t a large patch of land but it was dry, like really dry, not just solid mud.  We had carried some fire starting material from the previous camp and gathered wood, lit a fire and lay on palm leaves, too exhausted to do anything more that day.  We slept the best we had slept in days on that solid ground.  I guess anything is better than trying to fight mosquitos balancing on a soggy log in knee-deep water.

Things really did go uphill from that time onwards although what wasn’t stated was that the whole island was covered in poison ivy that was impossible to avoid and as our feet healed, my body broke out with lovely rashes from that crazy plant.   We rebuilt a shelter in the form of a lean-to with a fire in front of it and to this date this is definitely my preferred kind of shelter – full body warmth and great in those torrential rainstorms if you layer the roof right.  We found some blackberries and killed a nutria (although those tears are a story for another time – damn editing)  And then we hit the magical day 17 – the first day I actually felt like we fell off that knife blade of survival and hit the side of surviving this experience.  The first day I could say with confidence that we were going to get through it all.  Bring on extraction day!