Naked and Afraid Alone – Part 6 – I Am Enough 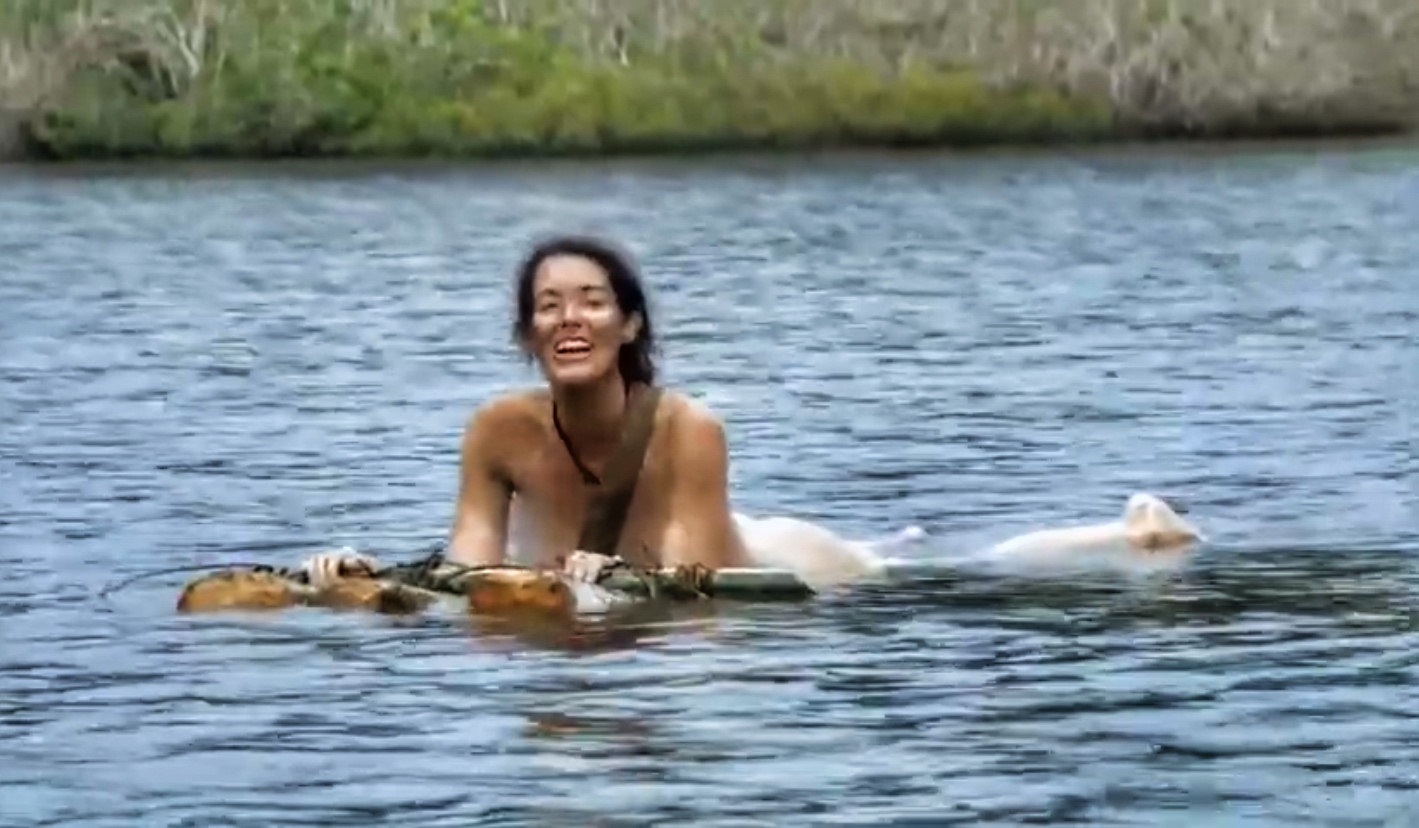 Those of you who have seen the show, know how this went down.  I found another tree of the type that might float but I could see that it would get caught in the canopy of other trees if I chopped it down.  I had no choice though.  It was the last tree in the area that was viable for my raft.  I spent the remainder of that day and the remainder of my strength chopping that tree down and another when it got caught in the canopy.  Three trees down and I didn’t have a raft to show for it.  Night was falling and I knew there would be rains as there had been every night.  I didn’t have time to gather firewood and so my best chance of survival was making sure I stayed dry through the night.  I quickly made a traveling version of the squirrel tail shelter and hunkered down as pitch black descended through the jungle.

It was a bleak night.  I was exhausted to my core. The chill was sweeping through the air and, just when I thought it couldn’t get any worse, a supporting strut broke, my shelter fell down on top of me and it started to pour.  I know that they edited out what happened next because I just started to laugh so hard.  It was all I could do.  My body temperature plummeted and by morning I had again reached dangerous levels of hypothermia.

This was it though – my last chance to reach the extraction point.  If I didn’t make it there by nightfall, I will have failed the whole challenge.  I staggered up and headed to where the tree lay from the day before.  I had to cut it into 3 pieces, make a raft and paddle 2 miles upstream to a lagoon where I would be met by a boat.  Easy enough right?

It’s always assumed that you are going to be able to get to your extraction point fairly early on that last day but it took me until about 1pm to get that tree cut into 3 pieces.  I knew that it wasn’t going to float well again by it’s density but I also knew it was my last chance so I hoped it would float somewhat enough for me to be out of the water.

I rolled the logs to the water’s edge and immediately saw I was again in trouble but now I had no choices.  I tied the logs together firmly with liana vine and sat on my raft.  The water was up to my waist with the logs completely under water.  There was no way I was paddling the raft out like that.   And there was no way that I had any more time to build another raft.  Again Beth asked me “do you tap?” “No” I replied through gritted teeth.

But I needed to figure this out.  I realized that if I maybe dispersed my weight over the whole raft, it might not be underwater.  I lay down.  It was better but still was mostly underwater.  It would have to do.  There was no way I was able to use the paddle I built in that position.  I would have to rely on my arms only to get out.  I sat on the bank to regroup and do one final diary cam before I made my push out of the jungle and into the river.  Out of the corner of my eye I saw movement and as I focused on the water, I saw the unmistakable head of a caiman slide into the only channel to freedom I had and then disappear under the water.  My only exit was now blocked by one of the largest crocodile species in the world.

I’m not going to lie, I was pretty much over the Amazon by this stage and all the roadblocks that had been put in my way trying to prevent my successful completion of the 21 days.  I decided then and there that If I was going out by caiman attack then this was the moment and I pushed my raft in the water and tentatively swam my way out of the channel.  I decided that as long as I didn’t paddle like a distressed fish, I might still make it.

At this stage I had hoped that I would be paddling with the current so I could at least get some help from the water but as I entered the main river system I realized that the current was not going to be in my favor.  Slight as it was, every time I stopped, it was pushing me away from my target destination.

I won’t bore you all with the next three hours of my life, except to say that I have no idea to this date how I did it.  I went to places in my mind where I’ve never been before to keep going.  I counted to 100 in my head and then started again, time and time again.  I couldn’t let failure in the last three hours define my whole experience out there.  If I tapped now, I would be the first person to tap on extraction day and that was not a legacy I wanted to have.

I was cut up, bleeding into piranha infested water, exhausted to my core and further into my reserves that I’ve ever dug but I could swim one more stroke and so I did.

I can’t describe the feeling when I finally got into the boat at the end.  Beth was asking me questions and I couldn’t even form thoughts or words, I was too far inside my mind.  I just knew it was over and I had made it.

When I was out in the jungle I had a dream of my mum.  I saw her sitting on a couch and she was saying “Ky you are doing so well.  Keep going.  I know you have this.” I knew it was a dream because I knew that even though my mum is always supportive of what I do, I knew she would look at this situation I was in and say “Come home Ky.  You don’t have anything to prove to anyone.  YOU are enough”.  In this moment I finally realized she was right.