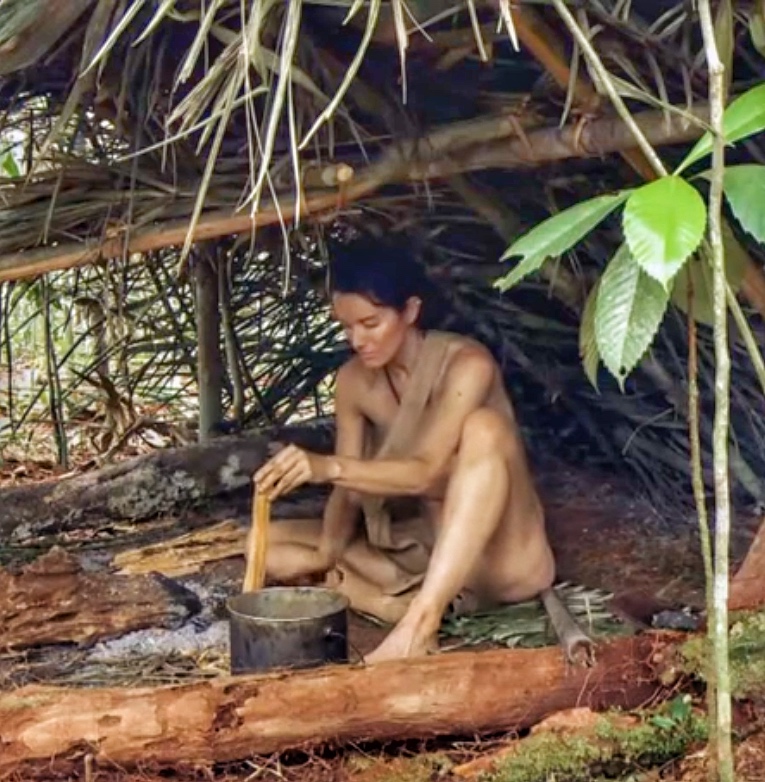 The night before Insertion was an interesting one for me.  The sounds of the jungle were all around me and suddenly I was besieged by doubts.  My mind was screaming at me.  “Don’t do it”  “You aren’t good enough” “This is too hard” and I was wondering at the logistics of quitting at this early stage.  I knew in my heart of hearts that I wouldn’t quit but the mind can be a terrible adversary when you are heading into an extreme adventure like this.  I had heard that no other female who attempted the challenge had succeeded.  In fact one had quit the night before even entering her location leading to the balance of 5 men and 3 women instead of an even 4 and 4.  The pressure increased, knowing I was the last female to take on the Alone challenge and I felt that it was up to me to prove that women were strong capable survivalists in this scenario.  (Of course many women have proved this and more over the years, it was just something that played on my mind in this moment.)

When the day finally dawned, I took a deep breath and headed to the insertion boat.  This was it.

In Australia our land is divided into many different tribal areas.  I had heard that the indigenous, when crossing from one tribe’s land into another, make a conscious movement to bend down and greet that new land and explain their intentions for being on the new land.   As I left the expanse of the river system and entered the jungle, I felt like this was going to be important to me and my existence out there, and so the first thing I did once I removed my clothes and entered the jungle was just that.  Regardless of belief systems, I feel like this connection I made with the Amazon was an important one for my survival out there.

Participants are given a mud map with a rough indication of where you are and where you need to begin your extraction from and an idea where the best location to camp will be.  I received the map, carved a spear and headed on my way.

One of the more common questions people ask is “why don’t you make some shoes?”  Well let me tell you, there was definitely no need to make shoes for the Amazon.  The leaf litter was soft and the mud smooth on the soles of my feet.  There was a humid heat in the air and a constant low hum of insects.  The smell was heavenly, like warm grass after rain and with every step into the jungle I went, the more relaxed I felt.

One thing that can happen in a survival situation when you have a destination in mind is that you can become very focused on that destination without capitalizing on the opportunities that you pass by.  A philosophy of mine is to always make sure I harvest and store the resources I see while traveling, not depending on them to be abundant near where I camp.  Too often people pass on valuable commodities only to find that they never see them again. This meant that by the time I made it to a suitable camp, I had an actual dry birds nest for my tinder bundle, dry tinder and two handfuls of oyster mushrooms that I was lucky enough to spy on growing on a fallen log.

Choosing a good campsite in the jungle is crucial.  High ground in the wet season is a must in case of flooding but also gets you away from pools of stagnant water where the mosquito larvae are breeding and allows a bit of breathing room from the caiman.  There is a theory that it’s best to get off the ground in locations such as these but anyone who has spent any time at all in a jungle without modern equipment will tell you the best place to sleep is actually on the ground.  The reason for this is that any time you build a platform, insects love to climb up high to explore and within no time at all, your bed will be crawling with them.

There is a key to sleeping on the ground however and that is to clear away all leaf litter.  You might think that leaves make for a comfortable bed, but in reality you are just making homes for all the biting and stinging things to join you in the night.  You can tell by the footage that most nights I was just sleeping in mud but it was for sure better than being bitten all night by bullet ants!  Another good tip is to surround your sleeping area with ash from your fire.  I’m not sure of the exact science behind it (I think it’s something about the lye in it not being good for them) but it certainly keeps most of them away.

After a few false starts of beginning to clear leaf litter away and finding fire ants nests where I thought I might bed down, I found a triangle of logs on a relatively flat peak and began to make camp.  The machete was a lifesaver.  Made by Diving Sparrows Knives, it kept a sharp edge for the entire time and had enough weight behind it to make short work of the small saplings I chopped down for the frame of my shelter.

With bushcraft knowledge you can’t learn everything about every environment in the world, there is just so much variation.  Therefore the key is to learn theories of what to look for to find suitable tools and materials.  For example rocks with fine grains are usually good for creating sharp edged blades. Another example is looking at how the bark peels off a twig in order to figure out if its bark is suitable for rope.  I was lucky enough to quickly find a whole grove of saplings that grew thin and strong for crossbeams and also had bark suitable for rope.  My shelter grew quickly from there.

I had decided to build a larger version of an Amazonian travel shelter as my design of choice.  The roof would need to be tall enough to safely house my fire within the shelter because the constant wet seasons rains were going to put it out otherwise and I would need to have a design I could reinforce and sustain every day to withstand the deluge.  This design is kind of like a squirrel tail with the stem of the palms cut to a point and pressed into the ground and the leaves draping over a cross beam.  With the abundant palm resources around me, the shelter was ready to be a home by mid afternoon.

Another little trick in wet tropical places is to scrape the surface of a dead palm stem to get dry tinder.  The palm stems are covered in a waxy surface the keeps the inside dry and makes for a good fluffy tinder that ignites easily with a ferro rod.  You have to use the fluff immediately though or else it absorbs the humidity and becomes too damp to work.

Needless to say with all these little tricks up my sleeve, I was feeling pretty smug at the end of day one with my shelter built, a fire burning, food in my belly and boiled water in my pot. This was my new home.